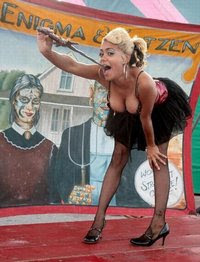 The freak show of yesteryear died out because of modern sensibilities that say it’s not right to stare at someone because of an accident of birth. This was too bad for human oddities who at one time would have become rich from such shows. But the Coney Island freakshow is not dead, it’s just different. It’s still OK to stare at people because of what they do instead of what they are. At Side Shows By The Seashore in Coney Island you’ll find modern day freaks who work hard to get your attention by performing amazing and bizarre acts for your amusement. Check out a post at mental_floss that looks at both eras of the freak show.
Posted by Miss Cellania at 2/15/2008 11:26:00 AM