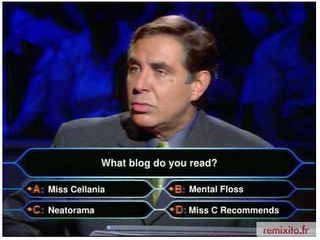 Which Way Does Water Flow in the Bosphorus? Both ways!

The London Beer Flood of 1814. Eight women and children were killed by the ghastly accident.

Why Everyone in the UK Learns to Drive a Manual Transmission.

13 Movies by Comedy Stars That Were Never Made.

How Far Can You Throw a Ball on Other Planets?

What Happens After Someone Else Makes Your Movie? It's a special kind of heartbreak when you come up with a great idea for a story, incubate it, and convince yourself it's worthy of a Hollywood movie, then ...you see a trailer for that movie. (via Digg)

Beavis and Butt-Head Have Aged.

For those asking, my home got somewhere between six and eight inches of snow yesterday. I'm fine, because I'm not about to go out in it. I'm not even going to bring my garbage bin back until we're above freezing, which will be tomorrow. I figure right now it's a good marker for where the curb is. My other neighbors apparently feel the same.

I learned to drive in a car that had a "three on the tree."

Quite a ruckus was raised over at TYWKIWDBI last year regarding millenials and standard transmissions.

It sure would be nice if the manufacturers were to *offer* some stick shift cars here in the States. If I were to have to buy a new car now I'd only have a dozen or so models to choose from.

I have two (very old) Camrys. One is a stick, the other an automatic. When I switch from one to the other, my left foot is sometimes surprised.

I had to look and was surprised to be so wrong. There are about 85 stick shift cars for sale in the US. Of course some of them are high-end sports cars or useless for some other reason.

Make some hot cocoa and enjoy the snow Miss C!

-chuckle- That's just a dusting Miss C. Actually, your snow is now my snow. Just sitting around enjoying the view of a quiet winter wonderland. Later today, I'll go out and move it around to make room for some more. Last night was traditionally the last night for Christmas lights. Thinking I might have to light up one more time. Too pretty to pass up.

You're right gwdMaine, the snow makes Christmas lights an order of magnitude better... and vice versa.

MissC, the garbage bin can wait, this too shall pass.

Just a thought on the auto vs manual transmission ...

When I got ready to purchase my first car (way back in the days of leaded gas, carburetors, and seat belts as an option), I was considering looking for a manual transmission vehicle because it was supposedly better on gas mileage, since a certain amount of the available power being sent to the rear wheels was being absorbed by the liquid in the slush-o-matic drive as opposed to a direct gear-to-gear system.

My own father suggested to me that I might want to reconsider, since I was mainly buying the vehicle in order to be able to transport my bicycle and myself to more distant locations – which was true.  He then pointed out that in case of emergency or injury where I might find myself unable to drive, someone else might need to drive my car to get my banged-up butt to the hospital or back home, and that if THAT person didn't know how to drive a stick-shift, I'd be up the proverbial polluted waterway without means of propulsion.