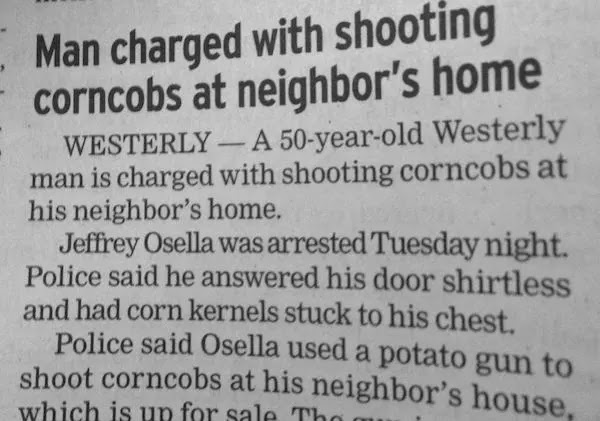 I made my first potato gun about 40 years ago. I still have it, but it is in bad shape. I have constructed about 20 of them over the years, many of them for friends, some as replacements for me. We used to have a summer potato gun contest, with accuracy, distance, and decibel level all contested. I live on about 10 acres with a large wooded area at t he farthest boundary. The nearest neighbor is maybe a third of a mile away. When nearest neighbor sold their house, new nearest neighbor called the police on us, reported that we were firing "mortars" into the woods. Police showed up, determined we were not using explosives, tried the gun a few times, left to placate the neighbor. The next year said neighbor was invited and presented with their own gun, problem solved.

I've tried shooting corncobs. They are usually too long and tend to fly rather badly, traveling end over end. If you cut them in half or thirds, they do much better.

This guy in Westerly is an advertisement for potato gun control.