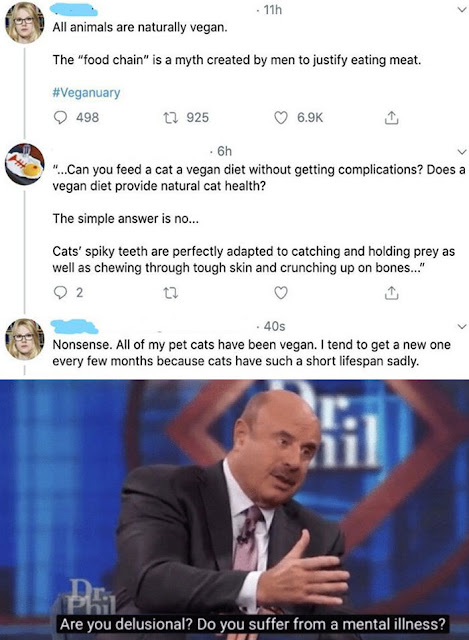 When you judge the group by the small percentage that are nuts, it gives the whole group a bad name. As a sane vegan who has 4 cats on a gushy fud, meaty diet this just makes all of us look stupid which is unfair.

I know this is humor and I'm going to seem like another humorless vegan, but stuff like this perpetuates the negative stereotypes about vegans that would never be accepted if this were about race or religion (no, I don't think we're the same, just pointing out that stereotyping isn't a good look for any group even if a fraction of the people exemplify the stereotype).

It also allows omnivores to never question about how the animals are treated before becoming their dinner.

Second paragraph fuels the need for the name Anonymous to be disallowed for being sneaky.

But Anonymous above should not think that 'omnivores' (wow, talk about pigeon holing) are all the same and react as a school of fish.

I myself eat animal flesh but care deeply about the welfare of said animal pre becoming food, this costs me a bit more which means I can't spend as much on beer and booze as I might have otherwise.

But knowing that the steak I eat lived a happy life and didn't have the terror of going to the abattoir and was just hanging around in the sunshine in a grassy field and then was killed instantly with a bolt gun, and away from the others, makes it all worth while.

Same goes with chicken, why would anyone want chicken that was raised in lousy conditions and fed meal made of who knows what, when they could have meat from one that pecked amongst grass and bushes while it wandered around freely.

Yes, the meat industry is a horrific thing and we better hope there is no god because he/she/it is going to be very, very annoyed with us for the treatment we inflicted upon it's animals ... the world's best ever author Douglas Adams posited that mice are the true gods, collectively, and that they ruled the world and mankind, us for those that hide behind anonymous names, merely as mic ... guinea pigs, there for the studying.

How about milk !
Have a look at how a cow is conned into still having milk after the farmer has ripped her boy baby away for dog food (girl babies get taken away from their mum's too, but they get fed milk powder mixed with water and kept to replace their mothers when they die) the harsh reality of that should put you off dairy forever ... but it doesn't.