Remembering the People of Mayberry 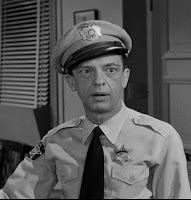 The Andy Griffith Show (TAGS) premiered on television on October 3rd, 1960. That means Sunday will mark the show’s 50th anniversary! There are events scheduled all over the country (and on TV) to celebrate this milestone. In the series’ eight-year run, we got to know the residents of Mayberry as if they were our own neighbors. Meet some of these characters, and catch up with the actors who played the parts, in this article I wrote for mental_floss.