Nuclear Quotes: The Crew of the Enola Gay 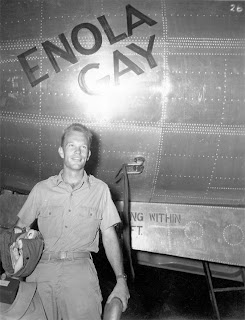 On August 6, 1945 the nuclear age began as the B-29 bomber Enola Gay dropped an atomic bomb on the city of Hiroshima, Japan. Twelve men were on that flight. After the war, some chose to keep a low profile and others spoke out about their place in history. Almost all had something to say after the war, as you'll see in this article I wrote for mental_floss.
Posted by Miss Cellania at 3/23/2010 09:45:00 AM