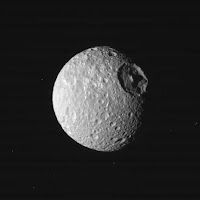 6 Things that Resemble the Death Star. The purpose of each thing is something other than destroying planets or making George Lucas wealthier.

Thinking Outside of the Toy Box: 4 Children's Gizmos That Inspired Scientific Breakthroughs. The best argument yet for letting people play while at work. (via Boing Boing)

Look Deep Into the Mind's Eye. A man who lost his ability to generate mental images didn't suffer any loss of skills, and gave neurologists an opportunity to study the remarkable resiliency of the brain.

6 Spectacularly Bad Ideas From History's Greatest Geniuses. To b fair, These men were the type who kept reaching for the stars until they finally hit a brick wall.

Popular Science has published its annual list of the ten worst jobs in science. You won't want to read this while eating.

Preparing for Passover, a scientist looks at the injunction to welcome and feed hungry strangers. Modern refugees aren't much different from wanderers of the past, so we are we so afraid of them?

A woman prepares doses of LSD on candy in a scene from the National Geographic Explorer episode called Inside LSD.