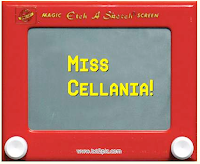 What do you do when you HAVE to have a particular sex toy, and the store is closed?

An update on the kitten found in Shanghai a few weeks ago. And she’s got eyebrows like this one!

The story of Paul and John, the neighbors who went to war over lawn chairs, has reached a turning point. Will John do the ethical thing, or the wrong thing that will make his neighborhood happy again?

Seven versions of Mahna Mahna. You can’t go wrong with a classic! Here’s one more.

People of Walmart is a user-generated image blog with a niche that’s as easy as shooting fish in a barrel. Honestly, when you’re talking about the world’s largest discount store, where you can find almost anything you need 24 hours a day, it’s a wonder you don’t see more people shopping in whatever they slept in. (Thanks, Bill!)

A nervous bride and groom just plain lose it during their wedding vows. Too funny!

There will be balls touching. Not what you think.

The Kittens in the Toilet. The hard parts of growing up are the ones that stay with you. “Childhood isn't something I'd ever willingly inflict on anyone.”
Posted by Miss Cellania at 9/08/2009 09:15:00 AM