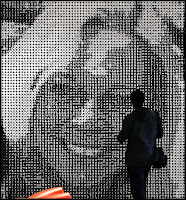 Photographer Howard Schatz took pictures of boxers before and after fights. It hurts just to look! (via J-Walk Blog)

One of my favorite scientists, Carl Zimmer has an extensive article in Time Magazine that looks at recent research on how your dog thinks. They are apparently smarter than they want us to know. (via Metafilter)

5 Facts About Woodstock The Hippies Don't Want You to Know. It’s not so much that these facts are secret, but 40 years later you might not know them. (via Fark)

Seven New Rules for the First-Time Home Buyer. The best advice is to listen to those who aren’t going to profit from your decision. (via Lifehacker)

How the values of Wal-Mart are shaping the US economy. That’s not necessarily a good thing.

The 6 Strangest Coming of Age Rituals in the World. If we don’t go through any of these, can we stay young forever?

As the new Dan Brown book The Lost Symbol is released, National Geographic takes a look at eight myths about the Freemasons and their symbols. Only the secrecy surrounding the Masons makes them seem eerily powerful.
Posted by Miss Cellania at 9/17/2009 06:50:00 AM