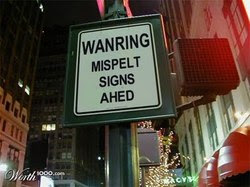 22 Misspelled Political Signs. Remember, you don't have to be educated, or literate, or competent in order to vote in this democracy.

“...a video depicting a war between pirouetting soldiers holding cardboard guns, replete with a singing ghost and piles of amputated limbs, set to a song sung in falsetto by a band with a painfully hip name.”

Galco's Soda Pop Stop in Los Angeles stocks 500 flavors of soda pop. In this video, learn about Romanian rose soda, the best-tasting diet soda, why glass bottles are better, and other fascinating facts about soda pop. (via Dark Roasted Blend)

50 things that are being killed by the internet. “The mysteries of foreign language” is mentioned as dying, but I’m still mystified by some of the Britishisms used in this list.

Kate Pong gives birth to quintuplets. But you shouldn’t assume too much about her just because she named them Barack, Bobbi, Beyonce, Earl and Tyra.

How do you write a review on music everyone knows from a band that recorded 40 years ago? Well, first you take your tongue and put it into your cheek. (via Metafilter)