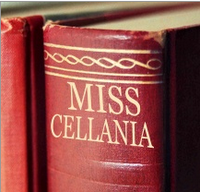 After a cochlear implant, a woman hears her own voice for the first time.

Twenty years later, Chelsea Clinton remembers her father announcing his run for president. She was only eleven, but knew more about the world than you’d expect.
Koch Brothers Flout Law Getting Richer With Secret Iran Sales. (via Metafilter)
The art of taxidermy has seen a resurgence in the past decade, after falling out of favor some fifty years ago. Learn about what's different about taxidermy this time around, and find plenty of links to online taxidermy collections and resources, at Collector's Weekly.

Some of the Dead Sea Scrolls are available for you to study online. Do you read ancient Hebrew?

The history of cheating on the SAT.

Have you ever seen an albino hummingbird? Marlin Shank tells about how he photographed one. (via Buzzfeed)

If there was ever life on Mars, scientists may have found one of its final resting spots. (via Neatorama)

The women's health book Our Bodies, Ourselves turns 40 this year (I must've had one of the first editions). The ninth edition is coming out, so let's see what's changed over the years.

Bank of America will start charging customers a $5 monthly fee when they use their debit cards for purchases. One more reason to switch to a small local bank or credit union. (via Metafilter)

How Cooked Food Made Us Human. I don't know about you, but I always feel more human after a well-cooked meal.

We are getting nothing while the other 1 percent is getting everything. We are the 99 percent. (via Metafilter)