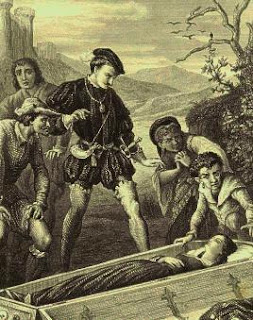 While researching the tale of Mercy Brown for the Cemetery Stories post, I read that she was the only accused vampire ever exhumed in the United States. The very idea that this is a notable fact gave me the willies. Is this so common in other countries? As it turns out, exhumation over supernatural suspicions happened quite often in our history, and many people have been accused of vampirism during their lives. There are so many such people that I limited this list I posted at mental_floss to examples of the different reasons people became known as vampires. Warning: these stories are all gruesome.