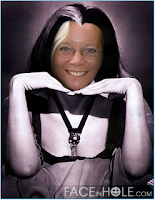 Attack of the Killer B-Movies! The story of Roger Corman and his many, many films.

CSI: Legoland. It’s just like the CSI you see on TV, puns and all, except Lego gore is easier to watch. Enhance!

The 8 Most Wildly Irresponsible Vintage Toys. I remember some of them from my own childhood, the one with no seat belts or bicycle helmets are minimum age for working as a babysitter.

“Fulci put a stuntman dressed as a zombie in a tank with a live shark and made them fight – it’s one of the craziest, most insane and irresponsible scenes ever put on film.” The 1980 film Zombie is doing a round at theaters.

America’s greatest superhero, 3D Man, invades NY Comic Con. He’s trying to get a movie deal like the other superheroes.

The Muppets will be in theaters on November 23rd for the first time in years. But some are not happy with what Jason Segel, Nicholas Stoller, and James Bobin have done to Jim Henson’s beloved characters.

The odds of a set of lottery numbers coming up like this are astronomical! Too bad they didn’t win you any thing.

Your favorite comic book heroes explain their views on the Occupy Wall Street protests. Each one has a background story and specific concerns that lend credence to their positions.

What Would Happen if Zombies Invaded Stephen Spielberg Films? Artists from all over let their imaginations run wild with that idea.