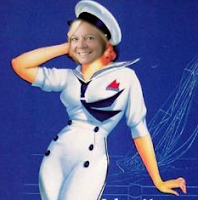 Who will be the inaugural inductees into the Trivia Hall of Fame? Nominees include Ken Jennings, Mangesh Hattikudur and Will Pearson, Alex Trebek, and Robert Ripley, so go cast your vote today!

And the Band Played On. Weird Al Yankovic provides music for the passengers of the sinking Titanic.

It only takes these cats a minute to re-enact all the Harry Potter movies. I think they skipped some plot points, but what would I know… I haven’t seen any of the films.

This guy decided to take the plunge and propose to his girlfriend. I think he interpreted that phrase a bit too literally.

5 Little-Known Pirate Stories (and a Quiz). You probably know more about pirates than you thought you did!

Ten Frighteningly Prophetic Parodies from ‘The Critic’. Don’t dare joke about horrible movie concepts, because producers will steal your ideas!