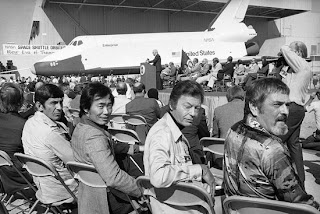 As soon as Apollo 11 delivered astronauts to the lunar surface, NASA was asked to develop a new space program that would be more immediately useful and (most importantly) more cost-efficient. The Apollo program continued through mission 17 in 1972, but meanwhile engineers were developing a reusable spacecraft. It was a totally new concept, a vehicle tough enough to go into space, complete mission after mission, and land on earth with such little damage that it could be sent up again. We didn’t see the first space shuttle until 1976. It was called Enterprise. Read about it in this article I posted at mental_floss.