The Enduring Legacy of Li’l Abner 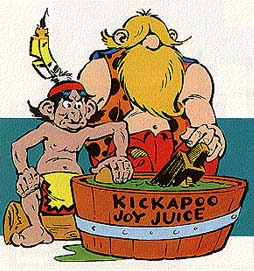 Li’l Abner was a comic strip drawn by Al Capp that appeared in newspapers from 1934 to 1977. Those born after the strip ceased publication may look at samples and see only humor based on stereotypical hillbilly culture, but when you follow the adventures of the citizens of Dogpatch over the years, it was so much more than that. Capp had plenty to say about the events, trends, and politics of his time. He used a parade of unforgettable characters like Moonbeam McSwine, Fearless Fosdick, and Jubilation T. Cornpone to comment on world events, buried but visible under a thick Appalachian accent. The comic strip spawned books, plays, movies, and TV shows, as well as an avalanche of advertising and merchandising. Forty-three years of Li’l Abner left us with cultural touchstones even my children know, although they don’t really know where they came from. Read aout them in this article I posted at mental_floss.