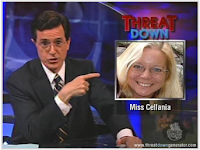 In the early 1970s, millions of Americans bought and wore metal bracelets each inscribed with the name of one American who was missing in action or a POW in the Vietnam War. Over the years, many who wore the bracelets got in touch with “their” POW, or his survivors. (via Fark)

The Evolution of Psychopathology. The difference between brain disorders and mind dysfunction is illustrated with the history of ADHD.

How do we express what cannot be said? Thomas Aquinas said to consign it to silence, but many philosophers just use more and more words to explain why it cannot be put into words. (via Metafilter)

7 People Fired For Blogging. So now you know where professional bloggers come from.

A 1995 Newsweek editorial explains why shopping on the internet will never take off, websites will never influence elections, and newspapers are safe. Then of course people studied these drawbacks and made a ton of money finding ways around them.

Seven graduates of the Bronx High School of Science went on to win the Nobel Prize in Physics. The schools resources varied over the years, but consistently instilled a love for learning.

The McGurk effect is a perceptual illusion that helps us hear by seeing. Run the video again without looking at it and it all sounds different.