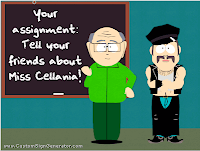 How would you expect children to react when they find out they’re going to Disney World? Better ask first; you could save yourself about a thousand bucks.

David Jablow took one simple template and made a world of imaginative drawings. Much better than it sounds. NSFW. (via b3ta)

Mick Jagger responds to Keith Richards about his new autobiography. It's fictional, but it's funny!

Steve Martin wrote a hymn for atheists. Rendered in four-part harmony by the Steep Canyon Rangers.


We’ve found the real reason there are no unicorns. They all died from diabetes or else collapsed under their own mass.

Damn You, Autocorrect! is a site for incorrect corrections that your iPhone thinks you need, even when you don’t. Poofarts and terbium almost make texting worth the effort. Some text may be NSFW. (via Metafilter)