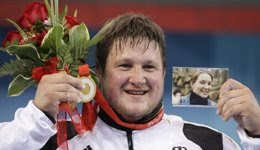 The best story of the 2008 Olympic games.

The Extraordinary Lives of the World’s Tallest People.

How to Make Your Own Daguerreotype. The first practical form of photography was made public 169 years ago, and is still just as difficult. But there are shortcuts!

Rocket Scientists Say We'll Never Reach the Stars. Unless we use a warp drive or a tesseract.

Emily is not real; she's a completely computer-generated image. But she looks so real, they have to throw in some weird stuff to prove she's not.

Scientists Create Blood From Stem Cells. Could this lead to the end of blood supply shortages?

13 Magnificent Renewable Energy Successes and Failures. EcoWorldly looks back at some of the projects they've reported on and how they are faring now.

Scientists Make a Fat-Burning Fat. Just like cholesterol, there is good fat and bad fat. Soon we may be able to convert the bad to the good.
Posted by Miss Cellania at 8/25/2008 10:05:00 AM