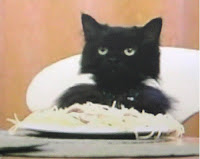 Was it a mistake or a prank? Either way, a spaghetti-eating cat does not belong in a show about binge drinking.

Real Man's Olympics determines the winning country the only way possible: by basing a country's score on the manliness of each event won. (via the Presurfer)

Earth's News Feed. The IOC has sent Michael Phelps 6 gifts. Bernie Mac has closed his account. Georgia is no longer friends with Russia.

If you liked the story of Christian the Lion, you'll love the Bigfoot Reunion.

7 "Eccentric" Geniuses Who Were Clearly Just Insane. Sort of like the guys you see in the online personals, only with historical accomplishments.

15 Images You Won't Believe Aren't Photoshopped. In fact, I've seen arguments break out over several of these.

Five Hoaxes that Fooled the World. Some were done for profit, some for kicks, and one just to bring one guy down a notch.

In the game Orbitrunner, you are the sun. You must use your gravity to keep the planets in line, or else they'll escape orbit or collide. But it's fun to collide.
Posted by Miss Cellania at 8/20/2008 09:48:00 AM