The Things That Carried Him 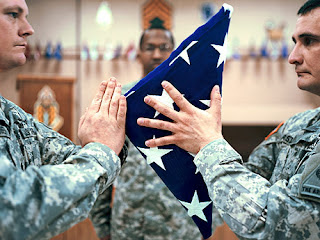 Esquire has a compelling feature that details the journey of Sgt. Joe Montgomery from Iraq to his final resting place in Indiana.

Looking at the faces of Joey's family, they could know that he was loved. Looking at his friends in their black concert T-shirts, they could guess that he really liked Nine Inch Nails. Looking at his Aunt Vicki, standing behind the pulpit and holding it together just long enough to read one of Joey's poems, they could learn that he liked to write. Looking at his flag-draped casket, they could be certain that he was a soldier. Looking at General Pinckney, giving Missie both a Purple Heart and a Bronze Star and promoting Sergeant Montgomery posthumously to staff sergeant, they could deduce that he was a brave one. They may have believed that he became a soldier because he had loved his country, but they could not have known that before he was a soldier he had been ashamed that his jobs in the steel forge and running cable for security systems had left his young family living in a bad part of town in a rented house with holes in the floor. They couldn't have known that he became a soldier because he wanted to make his older brother proud, and that he wanted even more to make a better life for his wife and his kids, this second generation of fatherless Montgomerys.

I’ve made it through two pages so far, and I have to take a break and compose myself. But this is one worth bookmarking. Everyone should read this, if it takes you all weekend.