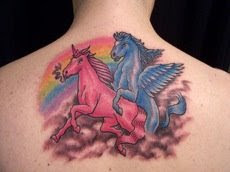 The Top Ten Most Stupid Tattoos.

Right-wing blogger checks up on Obama’s uncle, with satisfying results.

Top 11 signs you’re at a geek barbecue. And eleven more.

The 6 Most Badass Stunts Ever Pulled in the Name of Science. Usually I recommend an article based on the subject matter (which is fascinating here), but this one is also fun to read for the inspired hyperbole of the writing.

History's 9 Most Terrifying Beauty Tips. Some of these might make you sick, just like the ancients who actually used them.

An English teacher takes a red pencil to a blog post, with hilarious results. I hope she doesn’t stumble upon any of my articles!

Impatient Kittens. This is obviously a case of life or death, from the kitten’s point of view.

Cinemaroll has a side-by-side comparison of the actors in the original Star Trek series and the younger actors who will play them (as younger characters) in the new movie. Do they measure up as far as looks go? Kirk, yes, Spock, yes, Uhura, yes, McCoy, yes, Sulu, no, Chekhov, no. You may disagree.

You're always putting out great stuff. This is my first visit to this blog of yours. Didn't realize you were going in the various directions.