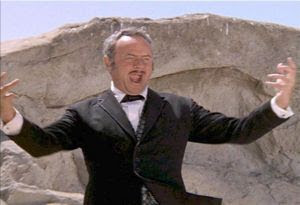 You'll remember him as Hedly Lamarr in Blazing Saddles, Dr. Charles Montague in High Anxiety, Count de Monet in History of the World: Part I, and Dr. Jack Seward in Dracula: Dead and Loving It. He made many many television appearances, including The Star Wars Holiday Special, The Jack Benny Show, The Lucy Show, The Flintstones, The Munsters, The Harvey Korman Show, The Tim Conway Show, Mama's Family, The Love Boat, and most memorably in The Carol Burnett Show, where he attempted to keep a straight face week after week under the onslaught of overwhelming silliness. Harvey Korman died yesterday at the UCLA Medical Center. He was 81. See some really funny clips of his work at YesButNoButYes.
Posted by Miss Cellania at 5/30/2008 09:28:00 AM