Oscar Pistorius is in the headlines as a South African amputee athlete who aspires to compete in the the Olympics. All well and good. The controversy is over his prosthetic legs, which he uses to run the 400 meter footrace. He recently won an appeal to give it a shot, although his best time is still slighter over Olympic qualifying standards. Pistorius’ abilities aside, the story raised a discussion (as in the comments at Neatorama) about the “slippery slope” of allowing prosthetic legs or any mechanical athletic enhancement. 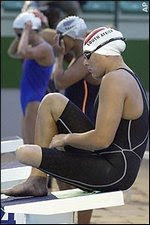 OK, but did you know about the OTHER South African amputee athlete who has already qualified for Beijing? Last month, Natalie Du Toit made the Olympic team in the new 10K Open Water Swimming event. Du Toit lost the lower half of her left leg seven years ago in a traffic accident. She is the first amputee ever to qualify for the summer Olympic games. Du Toit narrowly missed qualifying for the Olympic swmming team in 2000, before her amputation.

Unlike Pistorius, Du Toit does not wear a prosthetic leg in races and is therefore free to compete in Beijing. It is akin to competing in a sculling race with one scull or a kayak race with a single-bladed paddle. Her secret? Well, there is no secret, she says, no physical or technical trick to compensate for the loss of a limb. Just hard work and obsessive determination. "There's no real compensation. You just do the hours in the swimming pool, you do the hours of racing and you do the hours of mental preparation. You just go out and give it everything. I don't even think of one leg, two legs. When you're racing in an able-bodied competition you're all equal and you go out there and try your best, and that's what counts.

"Swimming is my passion and something that I love. Going out there in the water, it feels as if there's nothing wrong with me. I go out there and train as hard as anybody else. I have the same dreams, the same goals. It doesn't matter if you look different. You're still the same as everybody else because you have the same dream." 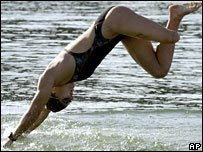 First off, this event involves swimming over six miles in the open ocean. There are waves, sharks, and some nasty pollution in your way. Second, Du Toit doesn’t use any sort of prosthetic when she’s swimming. No controversy, but she has to work twice as hard to get as far. Third, I would write a lot more, but I think I’ve pulled a muscle in my index finger while typing.
Posted by Miss Cellania at 5/18/2008 05:51:00 PM

Labels: biography of the day, sports