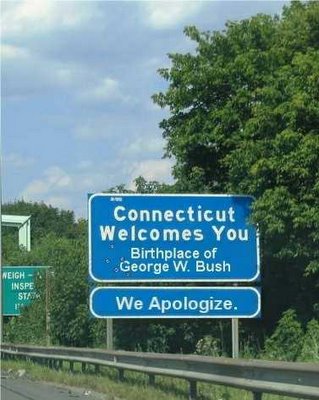 For some reason, I thought the next batch of Dubya funnies could be put off for another week or so, but the links keep piling up. Everybody wants to get into the act! I'm not complaining, its wonderful blogfodder. Thanks to all who have sent jokes, links, and pictures. Keep those coming!

THIS is funny (if you are familiar with the original song), from The Intellectual Comedy Salon (great source). Young MC meets Washington 2005. Lyrics only, but someone WILL make a video soon, I bet!

Subservient President. Type in a command and watch. I tried “dance” and “pray.”


BUSH IN OUR SCHOOLS 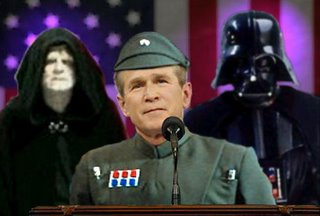 George Bush goes to a primary school to talk about the war. After his talk he opens the floor to questions. One little boy puts up his hand and George asks him what his name is.

"And what is your question, Billy?"

"I have 3 questions. First, why did the USA invade Iraq without the support of the UN? Second, why are you President when Al Gore got more votes? And third, whatever happened to Osama Bin Laden?" Just then the bell rings recess. George Bush informs the kiddies that they will continue after recess.

When they resume George says, "OK, where were we? Oh! That's right! - Question time. So who has a question?"

Another little boy puts up his hand. George points him out and asks him what his name is. "Steve" "And what is your question, Steve?"

"I have 5 questions. First, why did the USA invade Iraq without the support of the UN? Second, why are you President when Al Gore got more votes? Third, whatever happened to Osama Bin Laden? Fourth, why did the recess bell go 20 minutes early? And Fifth, what the hell happened to Billy?" 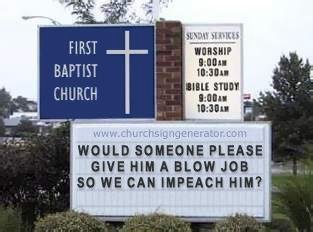 Thought for today: When women are depressed they either eat or go shopping. Men invade another country.. -Elayne Boosler (Thanks, Rita!)

Howdy! Fine joint ya got here, ma'am. I loves the BJ-Bush sign! If only!

Thanks for stoppin' by my place! Come back!

Just have to point out that the Connecticut sign is a fake.

The church sign is fake, too! But I don't think the technology will put cartoonists out of business anytime soon. At least I hope not.