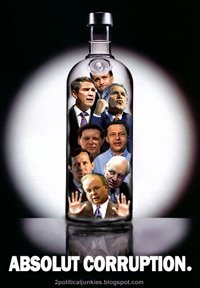 The last few weeks have not been good to Dubya. Its like when the little boy yelled “The emperor has no clothes!” and the rest decided they weren’t the only ones to see him naked. But there are no shortage of little boys this time. There’s Katrina, Rita, Scooter, Brownie, Rove, Harriet, Delay, and stuff like Iraq, the budget, and things like this. Ain’t nothin going “right” for poor Dubya these days. And the forecast is even worse. But we can always find SOME things to laugh at!

How about some videos?

Bush makes a cameo appearance in Schwarzeneggar Street, and in the U2 video Head, Shoulders, Knees and Toes.

An ad for Freddy Ferrer in his bid against Michel Bloomberg... featuring Dubya, of course.

All those indicted aides might need more lawyering than they thought. Here’s a suggestion... actually an ad.

Speaking of lawyers and such...Supreme Court nominee Samuel Alito has his own blog. He’s almost as happy about being in the limlight as Harriet Miers was. Personally, I’m sorry to see Miers out of the running. I figure if you have to have a new republican Justice, at least she’d be an ineffectual one.

A much shorter game, George Wants Beer. Use your mouse to try and keep him upright.

Arianna Hufffington had the passion and the info, and I love to read what she has to say. Hearing what she has to say is completely different, because HOW she speaks can distract you from what she's saying. So go take The Lucky Sperm Club test.

Show your support for indicted staffer Scooter Libby by getting one of these Posters!

Pictures I lifted from an very amusing blog called It Occurred To Me. He's got more Dubya fun on this post. 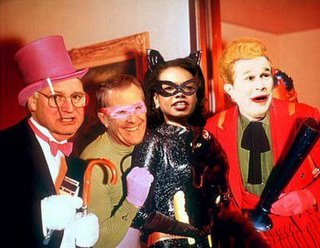 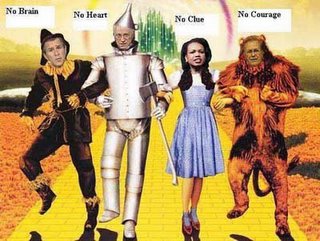 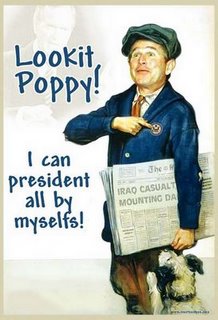 Q: How many Bush Administration officials does it take to screw in a
light bulb?

A: None. There is nothing wrong with the light bulb; its conditions are improving every day. Any reports of its lack of incandescence are a delusional spin from the liberal media. That light bulb has served honorably, and anything you say undermines the lighting effect. Why do
you hate freedom? (Thanks, Joe!)

The government today announced that it is changing its emblem from an Eagle to a CONDOM because it more accurately reflects the government's political stance. A condom allows for inflation, halts production, destroys the next generation, protects a bunch of pricks, and gives you a sense of security while you're actually being screwed. 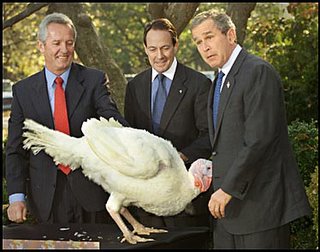 Another Dubya joke on Simply Left Behind.

Thought for today: The first thing you do when you find yourself in a hole is stop digging.

Grand Jury testimony of Karl Rove, the White House Deputy Chief of Staff of the United States (COSTUS), leaked by Rove-ing reporter (humor). How much will COSTUS cost us?

It is posted at: Karl Rove Says Who Leaked First

Thanks for the plug. I usually try to give credit of the origin of pics when I "borrow" them, but I lost the name of the site to provide a link to those Bush pics. They are too funny.