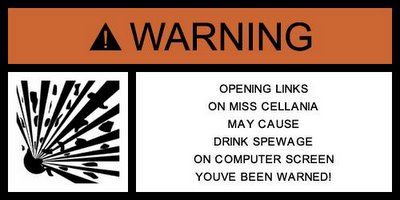 If you aren’t working today, you’re probably preparing to eat, eating, or recovering from eating. Between the parade, the relatives, the carbs, and the football games, stick around and try some of these links. A viable excuse for not doing the dishes or hauling out the Christmas decorations!

Before we get started, here's a semi-serious note. As we count our blessings today, know that I am thankful for the opportunity to try this blogging thing. Its become an enjoyable hobby. I am thankful for those of you who contribute material, those who link to Miss Cellania, and for everyone who stops by to read. Hugs and giggles to you!

OK, imagine mixing a game of ping pong with the kind of visual effects found in Crouching Tiger, Hidden Dragon or The Matrix. Now imagine it done live on stage, with no computer help. Can’t imagine that? Then watch the video.

Videoconference gaff...aren’t you glad this ain’t you?

We will pause here for a short advertisement. Watch it! 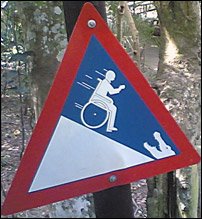 Bizarre signs, about 300 of them. Be sure to read the descriptions. Example at left.

I should include a game today. Hyperframe is one of my kid’s favorites.

Hear the "unedited" version of radio transmissions during Neil Armstrong's first moonwalk. I heard about a teacher who didn't have the sound on when he got this. It ALMOST made it into a class presentation! Its NOT child-safe.

Dreamlines will construct a dream for you. I entered the subject “Sa 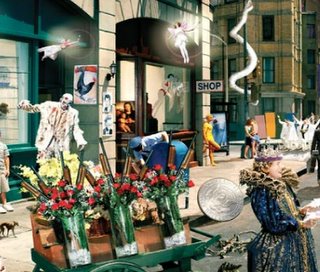 nta Claus” and got this. Abstract, but pretty! Lifted from Presurfer.


Try the Exercise Your Music Muscle game. There are 74 bands represented on a picture; only a small portion of which is shown here. How many can you identify? I found a bunch, but certainly not 74...yet.

Enjoy a view of Paris (the city, not her). Drag around for the full panorama.

Ed Bremson has a new blog, The Tao of Biotechnology, on a subject we all need to know more about. Give it a look!

When NASA was preparing for the Apollo Project, it took the astronauts to a Navajo reservation in Arizona for training. One day, a Navajo elder and his son came across the space crew walking among the rocks. The elder, who spoke only Navajo, asked a question. His son translated for the NASA people: "What are these guys in the big suits doing?"

One of the astronauts said that they were practicing a trip to the moon. When his son relayed this comment the Navajo elder got all excited and asked if it would be possible to give to the astronauts a message to deliver to the moon.

Recognizing a promotional opportunity when he saw one, a NASA official accompanying the astronauts said, "Why certainly!"and told an underling to get a tape recorder. The Navajo elder's comments into the microphone were brief. The NASA official asked the son if he would translate what his father had said. The son listened to the recording and laughed uproariously. But he refused to translate.

So the NASA people took the tape to a nearby Navajo village and played it for other members of the tribe. They too laughed long and loudly but also refused to translate the elder's message to the moon.

An official government translator was summoned. After he finally stopped laughing the translator relayed the message:

"WATCH OUT FOR THESE ASSHOLES. THEY HAVE COME TO STEAL YOUR LAND." 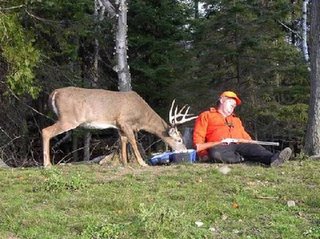 I came across several photos that define the term “incompetent hunting”. You might also enjoy this little video of deer boxing. 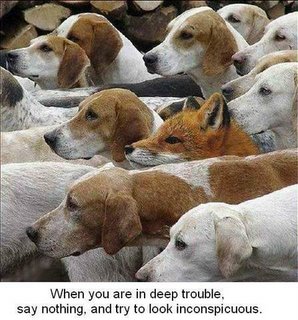 PS. I think if I put the words nude, nudity, and naked somewhere in a post, I'll get a lot more hits. I'll let you know how it works!

Did someone say "naked"?

Hi Blogger, I found your blog quite informative.
I just came across your blog and wanted to
drop you a note telling you how impressed I was with it.
I give you my best wishes for your future endeavors.
If you have a moment, please visit my a's restaurant and music cafe site.
Have a great week!