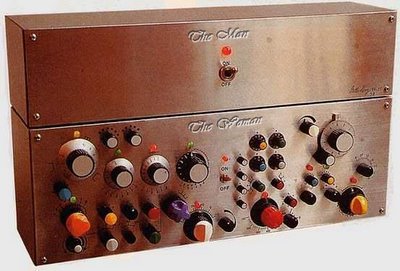 Gender differences have always fascinated me. I've collected a lot of funnies about the subject, so here's another chapter in a recurring series. Now, before you read the rest of this, remember I LOVE men. I also have a high respect for women. I know that there are way more differences AMONG men and AMONG women than there are BETWEEN men and women as a group. The stereotypes can by funny, though, and you probably need a laugh. So take these as they are intended, just plain fun.

2. VULNERABLE (vul-ne-ra-bel) adj.
Female.... Fully opening up one's self emotionally to another.
Male.... Playing football without a cup.

3. COMMUNICATION (ko-myoo-ni-kay-shon) n.
Female... The open sharing of thoughts and feelings with one's partner.
Male... Leaving a note before taking off on a fishing trip with the boys.

4. COMMITMENT (ko-mit-ment) n.
Female.... A desire to get married and raise a family.
Male...... Trying not&nb sp;to hit on other women while out with this one.

5. ENTERTAINMENT (en-ter-tayn-ment) n.
Female.... A good movie, concert, play or book.
Male...... Anything that can be done while drinking beer.

7 MAKING LOVE (may-king luv) n.
Female...... The greatest expression of intimacy a couple can achieve.
Male.. Call it whatever you want, just as long as we do it.

8. REMOTE CONTROL (ri-moht kon-trohl) n.
Female.... A device for changing from one TV channel to another.
Male... A device for scanning through all 375 channels every 5 minutes. 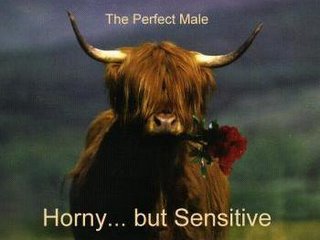 Argument (ar*gyou*ment) n. A discussion that occurs when you're right, but he just hasn't realized it yet.

Airhead (er*hed) n. What a woman intentionally becomes when pulled over by a policeman.

Bar-be-que (bar*bi*q) n. You bought the groceries, washed the lettuce, chopped the tomatoes, diced the onions, marinated the meat and cleaned everything up, but, he, "made the dinner."

Blonde jokes (blond joks) n. Jokes that are short so men can understand them.

Cantaloupe (kant*e*lope) n. Gotta get married in a church.

Diet Soda (dy*it so*da) n. A drink you buy at a convenience store to go with a half pound bag of peanut M&Ms.

Exercise (ex*er*siz) v. To walk up and down a mall, occasionally resting to make a purchase.

Grocery List (grow*ser*ee list) n. What you spend half an hour writing, then forget to take with you to the store.

Hair Dresser (hare dres*er) n. Someone who is able to create a style you will never be able to duplicate again. See "Magician."

Hardware Store (hard*war stor) n. Similar to a black hole in space-if he goes in, he isn't coming out anytime soon.

Childbirth (child*brth) n. You get to go through 36 hours of contractions; he gets to hold your hand and say "focus,...breath...push..."

Lipstick (lip*stik) n. On your lips, coloring to enhance the beauty of your mouth. On his collar, coloring only a tramp would wear...!

Park (park) v./n. Before children, a verb meaning, "to go somewhere and neck." After children, a noun meaning a place with a swing set and slide.

Waterproof Mascara (wah*tr*pruf mas*kar*ah) n. Comes off if you cry, shower, or swim, but will not come off if you try to remove it.

Valentine's Day (val*en*tinez dae) n. A day when you have dreams of a candlelight dinner, diamonds, and romance, but consider yourself lucky to get a card.

I love The Thinking Man’s Dictionary. It’s so extensive that I cannot reproduce it in its entirety here. So when you have time, take a look.

Meanwhile, here are some examples.

Alimony: (1) bounty after the mutiny. (2) the cash surrender value of a husband. (3) a system whereby when two people make a mistake, one of them continues to pay for it. (4) the high cost of leaving. (5) the screwing you get for the screwing you got.

Beauty: (1) the power by which a woman charms a lover and terrifies a husband. (2) feminine of intellect.

Bed: the place where marriages are decided.

Criminal: someone who gets caught.

Expert: (1) one who has focused all his ignorance on to one subject. (2) one who avoids the small errors as he sweeps on to the grand fallacy. (3) a person who can take something you already know and make it sound confusing.

Gentleman: one who does not tell the naked truth in the presence of ladies.

Male: a member of the unconsidered, or negligible sex. The male of the human race is commonly known (to the female) as Mere Man. The genus has two varieties: good providers and bad providers. 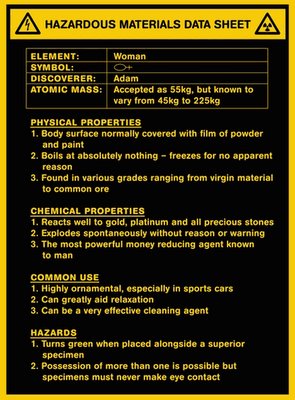 Neurotic: anybody who thinks you mean it when you ask how he is.

Optimist: (1) one who believes (a) that good arises out of evil, and (b) that there is no evil. / (2) a proponent of the doctrine that black is white. (3) a bridegroom who thinks he has no bad habits.

Respectability: The offspring of a liaison between a bald head and a bank account.

Sexism: maintaining that the sexes are equal.

Sorrow: the future tense of love.

Wealth: (1) any income that is at least one hundred dollars more a year than the income of one's wife's sister's husband. (2) difficult to dignify. 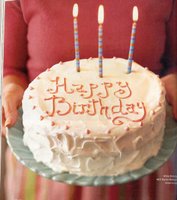 I must strenuously object!

Every man knows the definition of "thingie" is what we call our penises when amongst our old grammar school classmates.

the proper male term for bra hooks is "obstacles"...