This video follows the kitten Oscar as he bonds with his human, Brian. That's the way a human-pet relationship should be, and it's adorable. Oscar and his bud Kimi have their own Facebook page.

Pet-human relationships can get a little wonky over the years, though, as my personal experience will show. A few years ago, we had four cats and four people in this house. My cat was Gogo, my husband's cat was Tommy, Apollo belonged to Princess, and Marshmallow was Gothgrrl's cat. That was all well and good until the girls went off to college. Then Gogo succumbed to old age (she was 17). Then my husband passed away a year ago. So it's just me and three other peoples' cats. The girls come home occasionally, but they don't stay long. Sure, I take care of all the cats, and they depend on me, and I do my best to give each one personal attention. But transferring a special relationship to a new human takes time.

Marshmallow is now almost eight years old. She is deaf, and was always standoffish to people. For years, she couldn't stand for a human to touch her for more than a few seconds, although she acts downright maternally with the tomcats. She grieved when Gogo didn't come home. Just a few months ago, Marsh started to enjoy being petted. Now she'll even sleep in my bed with me, which never happened before. Strange that it took seven years for her to become comfortable with me.

Apollo (the ginger) is the alpha male. He was well bonded with Princess, but she's been gone most of the past three years. She hasn't come home in nine months now (she lives in Europe). Apollo is very friendly- he even approaches strangers walking past the house for his "tribute" of a back scratch. He expects a back scratch every time he comes into the house, like that means he's a good boy. But it's only in the past month that Apollo has started coming to me for extensive petting and cuddling.

Tommy was an injured stray, maybe three months old, when he came to live with us. He bonded strongly with my husband, who would watch TV in bed and pet the kitten. When I lie down, it's to go to sleep. About six months after my husband died, Tommy started jumping into the bed as soon as I got in it. He'd get up in my face with his awful breath and lick me. I would pet him and fall asleep while he kneaded me, claws out. He really needed that.

So after all this time, the three cats are fully mine. They may still expect their original human to come home at any moment, but they are no longer waiting for them. 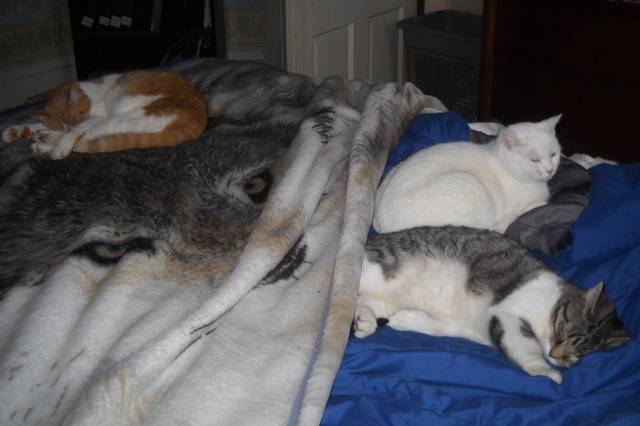 sweet story. And bravo to you for your love and affection for the kitties.

It's so nice to get an update on your kitties. It was sad when Gogo didn't come home. I'm sure you enjoy waking up with cat hair all over you as much as I do...it lets us know we're loved.

Oh Miss C, I'm so sorry I didn't know about your husband. My condolences.

Thank you, everyone. I have been meaning to write about the cats for a while, but kept putting it off. The video here inspired me to get around to it.

Did realize something was off but had no idea about Mr. Cellania's departure. Please accept my heartfelt condolences as well as respect for you perseverance through the alone times.

So glad the cats and you have settled into new routines. You sure don't have an empty nest! Sweet kitties.

OK, this explains, "Besides, my kid will be here, and she's too young to buy drinks.