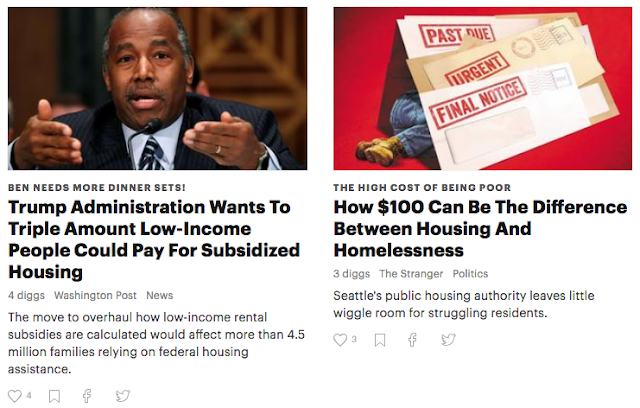 America doesn't have enough affordable housing, and certainly not enough low-income housing. I was struck by the juxtaposition of these two stories, side-by-side on the front page of Digg this morning. The Seattle eviction story is here. The Ben Carson story is at the Washington Post, which means I can't read it without paying, but here is a CNN version of the story. The proposed rules are not as draconian as the pictured headline implies, but it's an extra burden on those who cannot afford what they pay already.

I know a woman who was paying $400 a month in rent on a monthly income of $640. One unexpected expense, and she lost her apartment. I drove her to a homeless shelter yesterday, which has a spot, but it's twenty miles from her bank and her mailbox, and the housing authority won't have anything for several months at least.

I simply don't understand the "war" on the poor. Some people seem to think that poor people are poor because they're lazy and won't work. That may be true for some, but not for the vast majority. Often it seems to be people who declare themselves to be Christian, but didn't Jesus say, "The poor are always with us."?

Yeah, and He also said, "Feed my sheep."

The vast majority of the poor are children, elderly, or work but don't make enough money.