If You Will Indulge Me for Another TinyKittens Update 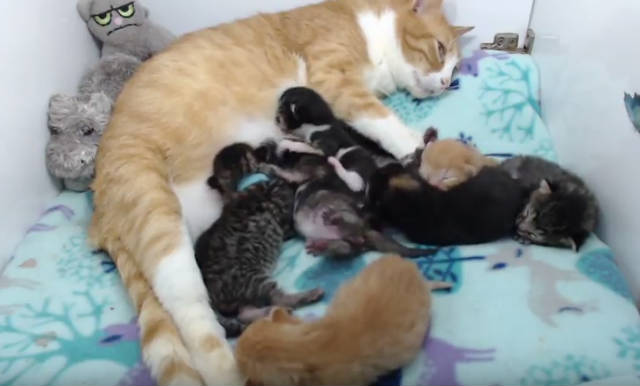 Three feral cats gave birth to litters at the TinyKittens shelter in British Columbia, and I've been watching them every day. Thirteen kittens were born, and four have since died from congenital weaknesses. Two of Rula's three kittens passed, and she appears to have lost interest in the last one (Nakia). Ramona had four kittens and lost two. Nakia was put into the nest that Ramona and Chloe (the big ginger) share, so all nine kittens are together, being co-parented by two mother cats. Chloe does most of the nursing, while Ramona does more of the cleaning. The depressed Rula will be given some time, and then she will go into treatment for her kidney problems, become spayed, and will be adopted out. Some of the kittens have partially opened their eyes. One kitten, Aura, has a cleft palate and is getting special feeding. She can't have it surgically corrected until she's 16 weeks old. You can join the 2K or so people watching the kittens here. You'll find more updates at Facebook.

You can't make this stuff up.

I am very aware of trichobezoars. Found one on the deck today. The hairball remedy I use is a mix of molasses and petroleum jelly, with fish flavoring.

Thanks for these & all the cat posts!

Too precious. Love the 'It Takes a Village' aspect of this. Makes me want to adopt even though I can't (haVE AN ANTI-CAT DOG)