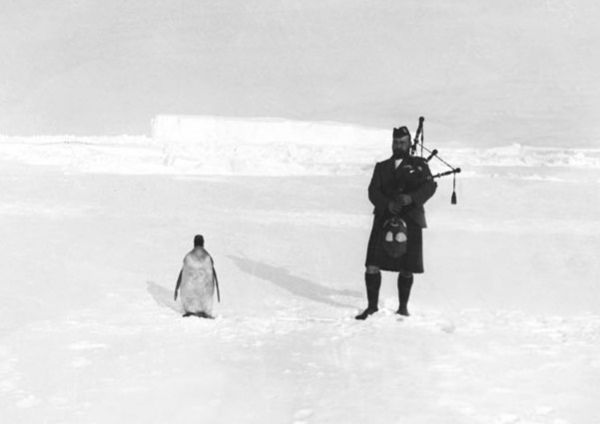 Today is World Penguin Day! Just ask Benedict Cumberbatch. He should just say "woggin." It's a good time to learn some things about penguins. For example, I knew that emperor penguins were the largest species, but I never thought about what a four-foot bird would be like up close. That's almost to my shoulder! So, in the picture above, piper Gilbert Kerr is about eight feet tell, or else that bird is some other penguin species. There are plenty of other things to learn about penguins, like

5. Fossils place the earliest penguin relative at some 60 million years ago, meaning an ancestor of the birds we see today survived the mass extinction of the dinosaurs.

6. Penguins ingest a lot of seawater while hunting for fish, but a special gland behind their eyes—the supraorbital gland—filters out the saltwater from their blood stream. Penguins excrete it through their beaks, or by sneezing.

Actually, every species alive today had ancestors that survived the extinction of the dinosaurs, if you think about it.

So is Neatorama done? I will miss it!

No, it's still there, just scaled way back because of lack of funds. I am no longer the manager, and the staff is gone. I'm posting a little. If Alex gets a buyer, or lots of funding, it might return to its former glory.