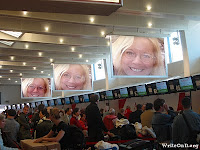 Everest 2012.  Gorgeous photos from NatGeo's current trip to the top of the world.

The history of medical intervention in childbirth. It may not be natural, but it's saved a lot of lives.

A new poll of America's favorite cities shows the Pacific Northwest has a great reputation, with cities #one and #two. Take a guess at the city coming in last.

Why do we say "Ye Olde" something-or-other when we want to sound Old English? According to the history of the term, it was never pronounced that way!

The Upside of Ignorance. The quest for scientific knowledge is fueled by what we don't know, and the search is the real satisfaction.

The story of Batman was turned into an opera called Holy Musical, B@man! Part one sings and dances about how Bruce Wayne became the Dark Knight.

What happens when a school achievement test question really has no right answer? In the case of the talking pineapple question, it becomes famous.

Frans Hofmeester strung together video clips of his daughter's face taken every week from birth to twelve years old. Using video instead of still pictures highlights how much little girls talk while getting their picture made.

Watch a male seahorse give birth to babies: lots and lots of babies. If you were pregnant with 1800 offspring, you'd change color, too!


10 Secrets from the Wonderful World of Disney.

intervention is just becoming FAR too commonplace in birth, and "normal" is being defined within those parameters. Horrible. I'm for medical aid where medical aid is warranted, but in birth, we've gone too far and are going further. It's a problem, and it's expensive, as well as dangerous. (Epidurals have a whole set of risks people seem so happy to ignore, just for starters.)