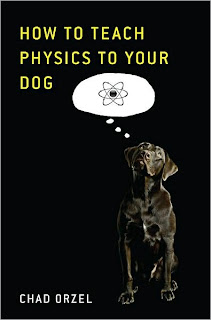 A mathematician walks into a bar accompanied by a dog and a cow. The bartender says, "Hey, no animals are allowed in here."

The mathematician replies, "These are very special animals."

The bartender raises his eyebrows and says, "I've met a number of knot theorists who I thought were animals, but never an animal that was a knot theorist."

"Well, I'll prove it to you. Ask them them anything you like."

So the bartender asks the dog, "Name a knot invariant."

The bartender scowls and turns to the cow asking, "Name a topological invariant."

At this point the bartender turns to the mathematician and says, "Very funny." With that, he throws the three out of the bar.

Outside, sitting on the curb, the dog turns to the mathematician and asks, "Do you think I should have said the Jones polynomial instead?"

This is a great variation on one of my favorite jokes:

Guy walks into a bar with a dog and the bartender says, "Hey, no animals are allowed in here!"

Guy replies, "This is a talking dog".

Bartender scoffs, "I'll give you a free drink if you can prove it."

Guy turns to his dog and asks him, "What is the structure on top of a house?"

"Pay up", says the guy and bartender scowls, but gives the guy his drink.

"Ask him another question", says the bartender.

Guys asks his dog,"What did Queen Elizabeth I wear around her neck?"

The bartender is ticked off but pays the guy off with a drink.

"I'm a glutton for punishment", replies the bartender, "But no more easy ones..."

Guy turns to his dog and asks, "Who hit sixty home runs for the Yankees in 1927?"

Sure enough, the dog barks "Roof!", and the bartender yells, "I've had enough!", and throws the guy and his dog out onto the sidewalk.

On the curb, the dog turns to the guy and asks apologetically, "Was it DiMaggio?"