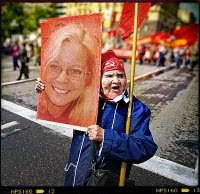 A Mother’s Prayer for Her Child by Tina Fey. Amen.

10 Famous Stage Mothers, in case you need a reason to appreciate the mom you have. Read it, then buy yours a nice Mothers Day gift.

There were 79 commandos involved in the bin Laden raid -and one dog. While the dog’s identity is as secret as the SEALS, you can see and read about how dogs fit in with elite Special Forces teams. (via The Daily What)

Take a quiz to see how your beliefs are labeled on the political spectrum. Then see how you compare to the rest of the country.

9 Absurd Movie Premises That Actually Happened. You’d think maybe they could’ve made these movies more believable by explaining that, because we all know truth is stranger than fiction. NSFW text.

The Science of Statistics Applied to Serial Killers. And you thought Nmb3rs was an absurd premise. (via Metafilter)

How Ex-Presidents and Prime Ministers Make their Money. Respect can turn into cash in retirement.

What kind of animal was a thylacine, anyway? It’s hard to study an animal we drove to extinction less than 100 years ago, but scientists are giving it a try.

The Art of the American Fire Helmet. Safety comes first, but tradition dictates the helmet’s shape, the significance of its color, and how it is personalized. (via Boing Boing)

The rise of reality TV. We’ve gone from documentary to cheap game shows, but what does that say about the audience? (via Jason Kottke)

6 Unforgettable Movie Mothers and the Real Moms They Depicted. In case you didn’t know, this is to remind you that Mothers Day is this Sunday.
Posted by Miss Cellania at 5/06/2011 06:03:00 AM