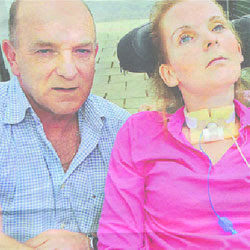 Imagine losing control over everything. You can’t move on your own. You can’t scratch an itch. And worse still, you can’t tell anyone around you that you have an itch. You can feel pain, hunger, loneliness, and fear, but you can’t react to those sensations. You are totally aware of your surroundings, but you can’t communicate your feelings or desires, or even your basic needs. The term for this horror is locked-in syndrome. Someone with locked-in syndrome suffers from paralysis of all voluntary muscles except for those that move the eyes. This can be caused by neurological disease such as ALS, strokes, injuries to the brain stem, or drug overdose. The term locked-in syndrome has only been in use since the 1960s. Before that, people who suffered such traumatic injuries generally died from them, or else they were considered to be brain damaged. Here are the stories of eight people who have lived this nightmare.