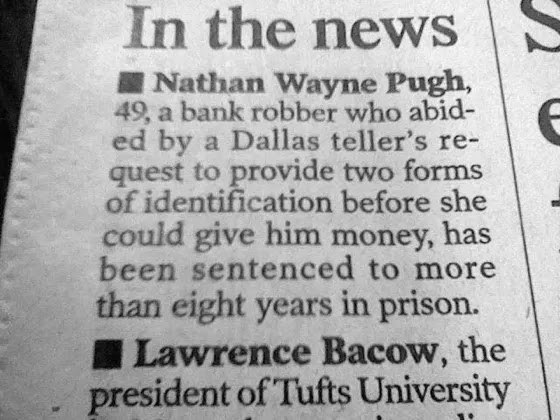 I wanna know what stupid thing the President of Tufts did.

Press release regarding the sentencing of the genius bank robber - worth a read.

Lawrence Bacow left Tufts University in June 2011 to become the President of Harvard. Not sure why he was in the news in March of 2011 (When the bank robber was sentenced.

It's a good thing crooks are this dumb, or cops wouldn't even catch as many as they do.

Although as long as the current policy seems to be 'catch-and-release', as in the case of the woman who had over a dozen incidents on her record before causing that fiery crash in L.A. a week ago, I guess it doesn't really matter.