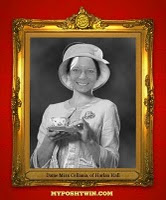 What Is Up With Noises? Math whiz Vi Hart explains the science of sound in an engaging video.

8 Classic Novels In 33 Words Or Less. Sometimes as few as three words, but only funny if you’ve actually read the book.

Rapper/designer CMYKilla gives you some Photoshop advice delivered in rap form. Oh yeah, that will help you remember what buttons to push. NSFW language.

What it's like to play online games as a grownup.

About twenty years ago, Pixar gathered some 200 suggested names for an animated film about toys, which eventually became Toy Story. Here are sixteen of those titles that might have been.

Believe it or not, you can knit ramen noodles. This is why you should never overcook them.

The stories behind 18 perplexing band names. Oh, no one says they have to make sense, but they all came from somewhere.

OK Go teams up with the Muppets for the happiest music video ever. Despite what you've been told, it's not over when the fat lady sings.