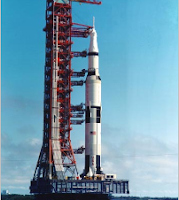 Bookmark the site We Choose the Moon to follow the Apollo 11 mission to the moon in real time 40 years after it happened. The launch will be Thursday morning, and you can follow with NASA feeds, newscasts, and even Twitter updates.

The New York Times looks at the history of human-whale interaction, from whale hunting to the modern effects of sonar on the cetaceans. But in the lagoons of Baja California where gray whales give birth, mother whales seek out human contact, as if wanting to make friends. (via Metafilter)

Vanity Fair takes an in-depth look at pearls, the only precious gem that is manufactured by living beings. They've been prized for thousands of years, but may be in trouble in the present.

New technologies can tie your brain into computers, vehicles, and prosthetics. Will that lead to hackers being able to get into your brain?

How the turtle got its shell. It basically grew its ribs outside the body -and that's only the beginning of the weirdness of turtle anatomy.

Self-help through Negative Thinking. It turns out that trying to get people to think more positively can actually have the opposite effect: it can simply highlight how unhappy they are.

One out of every five U.S. soldiers comes back from Iraq and Afghanistan with mild traumatic brain injury. These invisible injuries can cause varied symptoms which make a soldier a different person.
Posted by Miss Cellania at 7/14/2009 07:29:00 AM