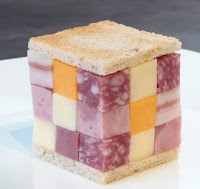 The Rubix Cubewich: a sandwich that's a Rubik's Cube made of pastrami, salami, cheese, and all-around deliciousness. I want one NOW! (via Neatorama)

They had to reshoot the end of Back to the Future for the beginning of the sequal, since there was a new actress playing Jennifer. Now you can see a side-by-side comparison.

The 7 Professors You'll Have in College. I graduated thirty years ago and still remember all seven. (via Gorilla Mask)