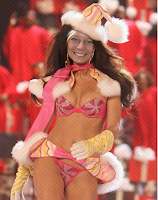 One truly strange story of kinky sex and attempted homicide.

This is how you draw a crowd at Dance Dance Revolution. (via b3ta)

Dance-Off with the Star War Stars 2009. The annual Disney celebration has Darth Vader and his Storm Troopers doing MC Hammer.

A Russian hobbyist put together a diorama of World War II action figures assembling a terminator to fight the Germans. The title of the post is Laughter is Stalin's Secret Weapon. (via Metafilter)

What men are really thinking. Letting women think they are simple minded is much easier than discussing their thoughts!

Lithuanian composer Mindaugas Piečaitis wrote a performance for Nora, the Piano Playing Cat, and debuted Catcerto on June 5th. Nora played with the Klaipėda Chamber Orchestra through the magic of video recording.

If you got your chance to go on a national news program for an interview, would you have the cajones to pull this off? The result is way more attention and fame.

From Slate magazine, a masterful edit showing how modern news outlets would cover the first man on the moon. Even Twitter gets some airtime. (via Buzzfeed)
Posted by Miss Cellania at 7/22/2009 08:31:00 AM