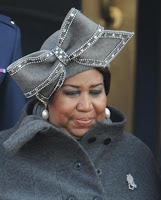 The fashion statement of the inauguration was Aretha Franklin's hat. In just a few short hours, everyone is trying out the look.

Marry Me, a cute short film about a girl who likes a little boy and a boy who likes his BMX bike. Inspired by a true story.

An animated music video for "Ding" by Seeed puts the wild back in wildlife. Warning: The tune might stick in your head all day.

The Remnants is a web-only series pilot (starring Ze Frank) shot during the writer's strike about life after the apocalypse. If you like it, sign the petition for more episodes.

The 5 Most Terrifying Civilizations In The History of the World. Their behavior makes one question the definition of "civilized".
Posted by Miss Cellania at 1/21/2009 08:24:00 AM