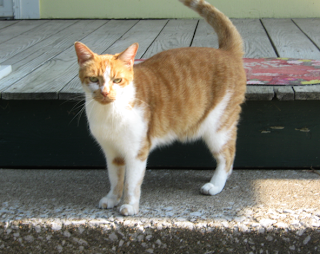 When we moved into our new home in August, we noticed an orange and white cat hanging about. According to the neighbors, he was a stray who roamed from house to house hoping for a snack. The lady across the road called him Crazy Cat, but my daughters decided his name was Milo. Milo soon learned they were soft touches, and he stayed in our yard more than any other.

Princess and Gothgrrl fed him on our back deck most of the time. It didn't take long for other neighborhood cats and dogs to find the food we left for Milo. I found myself chasing away strange animals a bit too much. We tried difference ways of feeding him, and discovered that he ate in the manner of a stray -all of it at once, lest another animal come by and get it. I warned the girls not to put food out unless Milo was around. He was, most of the time.

Milo liked to lay on top of the van. Several times, in good weather when I left the vehicle windows open, I was surprised to find him asleep inside. I started the car and he would leap out the window from the back seat. The first time that happened, it took me a few minutes to recover! Milo began to crawl into my lap any chance he got. When I returned home from errands, Milo would recognize the van blocks away and run to meet me.

Princess visited Milo's alleged original owner and told me the woman had a dozen cats inside! The woman said she put the orange cat out because there were just too many. I didn't voice my opinion on someone who would do that, but Princess understood. 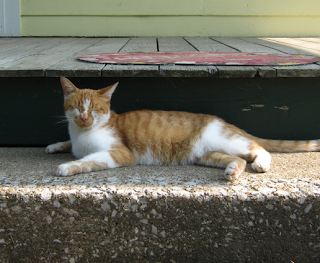 As the weather worsened, we fed him in the basement, which meant leaving the basement door slightly open. He adapted right off. We made him a bed of old towels and he would lay there and purr in his sleep. He also purred while he ate. Later, as the basement got colder, he began sleeping on boxes closer to the furnace. I would occasionally catch a gray cat in the basement as well. My daughter said, "Oh, that's Milo's wife." The gray cat was never welcomed; I have my limits, after all. I was concerned about leaving the basement door ajar. Who knows how cold this winter will be, or how easy the pipes will freeze? I considered installing a cat flap.

Our male cat Biscuit hated Milo with a passion. Biscuit stays inside, except for the time we took him outside for a portrait. He spotted Milo on the porch and went ballistic -that's when he almost tore my arm off. Shortly after, we discovered that Milo was declawed! My opinion of his original owner went downhill. A declawed cat can't climb trees to avoid dogs, can't defend himself in a catfight, and cannot catch mice or fish. They have to be sheltered and protected. I would've taken Milo inside at that point, if it weren't for Biscuit.

Then just last week, Princess went on a field trip with her class and a few parents. One of her friends' father told the story of their last cat, who went outside and never returned. He said he would love to have an indoor cat, but it would have to be declawed and he didn't feel good about doing that. Princess immediately offered Milo. The family accepted even before they met him! They bought a litter box and cat food and came over to get Milo the next day. 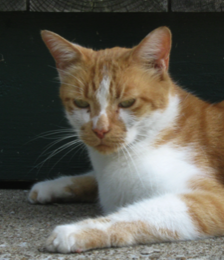 Things worked out for everyone. Milo has a good home where he can stay warm inside and be petted by two adults and five children. The family has a declawed cat they don't have to feel guilty about. Since they live only a couple of blocks away, my daughters can visit. And I can shut the basement door. Now there's a happy ending!