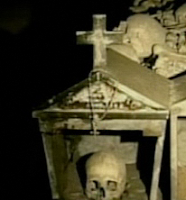 Beginning in the 1600s, almost a million nameless people were buried in an old rock quarry in Fontanelle, Italy. Those who live can "adopt a skull" and mourn for anonymous remains.

CSI and other TV shows have changed the way people perceive crime investigation. Real life forensic pathologists will tell you that the truth of the profession is very different. (Thanks, Amy!)

Cappadocia, Turkey is Tatooine on earth, only without the Sand people, Jawas, and annoying Storm Troopers.

Is Obesity All In Your Head? I thought it was in the waist and hips, but scientists say genes might hardwire some people into overeating.

A journalist reflects on her five years of covering news in Africa. Despite war, injustice, and despair, she grew to love the continent. (via Metafilter)

Why are more male babies born after wartime? We don't know the answer, but the question itself leads to an intriguing genetic hypothesis.

Instead of keeping track of your faults, discover what's good within you: your character strengths and values. It will take about 15 minutes to complete the full VIA Survey on Character.

The most important ingredient in holiday baking is the butter. Here's the science behind those explicit cookie recipe instructions. (via Lifehacker)
Posted by Miss Cellania at 12/24/2008 07:53:00 AM