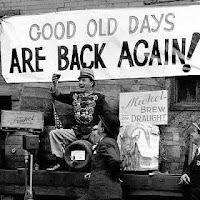 On December 5th, 1933, congress ratified the 21st Amendment, which repealed Prohibition. In celebration of that occasion, here are Ten Great Moments in Beer History.

The 40 Greatest Lost Icons in Pop-Culture History is a "where are they now" full of folks who had their 15 minutes of fame and were never heard from again. Most, it turns out, for good reason.

The Holy Church of Bacon. Where you can work toward Baconlightenment!

7 Historical Figures Who Were Absurdly Hard To Kill.

As a game, it's a simple run-and-jump maze. As an art project, it will take you to many familiar websites. i made this. you play this. we are enemies.

You be my princess, I'll be your toad, I'll follow behind you on rainbow road. The beautifully sincere Mario Kart Love Song.