Links to Learn From 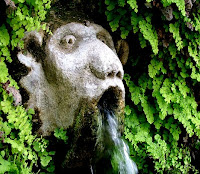 The World's Most Bizarre and Intriguing Water Fountains. My favorites are the kind you can walk through.

The 3 Coolest Ancient Air-Conditioning Devices. Environmentally friendly even when they didn't have to be!

Are Humans 80,000 Years Older Than Previously Thought? Tools found in Ethiopia are older than the oldest Homo sapiens bones ever found.

A quarter-century marriage to a man behind bars. She became a lawyer; he became a leader of the violent prison gang the Aryan Brotherhood. Part two and part three. (via Metafilter)

Happiness is more contagious than we ever knew. That's the kind of epidemic worth spreading around.

Eleven Clever Tips for Digital Camera Owners. Some of these are more interesting than your vacation shots.

Who flew before the Wright Brothers? They were rightly credited with the first successful flight, but they weren't the only ones looking for the glory -and the cash.