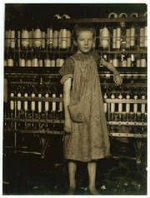 Photographer Lewis Hine spent a decade documenting child workers for the National Child Labor Committee in the early 20th century. His famous photos helped to outlaw child labor in America. Joe Manning has spent considerable time on a project to find out what happened to the children in the photographs, and is posting his findings. Among others is the story of how he uncovered the story of Addie Card, described in the Hines photo as “an anemic little spinner”. Manning began his search inspired by the work of author Elizabeth Winthrop.

How long did she work at the mill? Did she finish school? Did she have children? How long did she live? Could she have living descendants? Had she been aware of Hine's famous photo? That's what Elizabeth wanted to know - and at that moment, so did I. As a historian, author and genealogist, I had experienced the excitement of the hunt and the elation of turning over the right rock at the right time.

Manning found what he was looking for in the case of Annie Card, and it’s a fascinating story. He’s had varying levels of success for the other photo subjects in this ongoing project. (via Metafilter)
Posted by Miss Cellania at 1/17/2008 09:42:00 AM