Why nutritious food is more expensive. 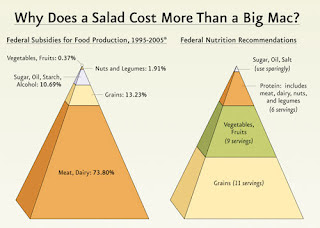 Why does a salad cost more than a Big Mac? Click the graphic to enlarge it.


The Farm Bill is one reason why poor Americans are more liable to be obese.

...the current farm bill helps commodity farmers by cutting them a check based on how many bushels they can grow, rather than, say, by supporting prices and limiting production, as farm bills once did. The result? A food system awash in added sugars (derived from corn) and added fats (derived mainly from soy), as well as dirt-cheap meat and milk (derived from both). By comparison, the farm bill does almost nothing to support farmers growing fresh produce. A result of these policy choices is on stark display in your supermarket, where the real price of fruits and vegetables between 1985 and 2000 increased by nearly 40 percent while the real price of soft drinks (a k a liquid corn) declined by 23 percent. The reason the least healthful calories in the supermarket are the cheapest is that those are the ones the farm bill encourages farmers to grow.

And don’t be thinking these subsidies are mainly helping family farms. There are hardly any of those left. Subsidies go to giant conglomerates like Archer Daniels Midland and Con-Agra (also remember the names Tyson, Cargill, and Monsanto).
Posted by Miss Cellania at 11/01/2007 01:02:00 PM