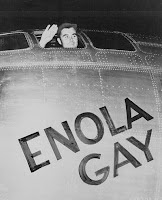 Paul Warfield Tibbets, Jr. was a Squadron Commander in World War II. In 1943, he was a test pilot for the new B52 bomber. He put in 400 hours of test flights, and becam the most experienced B52 pilot at that time. In 1944 he was put in charge of designing and commanding a delivery system for an atomic bomb.

August 6th, the Enola Gay lifted off North Field with Paul Tibbets and his crew en route to Hiroshima. At exactly 09:15 plus 15 seconds the world's first atomic bomb used in combat. The course of history and the nature of warfare was changed.

140,000 people died immediately in Hiroshima, with more dying later of injuries and radiation-induced illness. Three days later, a second bomb was dropped on Nagasaki, killing 80,000 more. The Japanese announced their surrender to the Allies on August 15, ending World War II.

Tibbets retired after 29 years in the military in 1966 with the rank of Brigadier General. He went on to work with aviation companies in different capacities, including Chairman of the Board of Executive Jet Aviation. He retired for good in 1985. On the occassion of the 60th anniversary of the Hiroshima bombing, Tibbets said:

"In the past sixty years since Hiroshima I have received many letters from people all over the world. The vast majority have expressed gratitude that the509th Composite group consisting of 1700 men, 15 B-29s and 6 C-54s were able to deliver the bombs that ended the war."

"Over the years, thousands of former soldiers and military family members have expressed a particularly touching and personal gratitude suggesting that they might not be alive today had it been necessary to resort to an invasion of the Japanese home islands to end the fighting.”