Lumberjack in the Desert 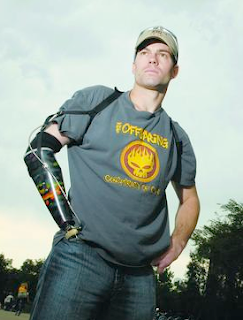 J.R. Salzman was a world champion athlete in an obscure sport when he joined the National Guard in 2004.

When he was wounded nine months ago, Darrell "J.R." Salzman, now 28-years-old, was among the preeminent outdoors athletes of the previous decade. In the six-year run of ESPN's Great Outdoors Games, he won a record 14 medals, in logrolling (a.k.a. "birling") and the boom run, in which competitors sprint along chains of logs. In 2005 he took home an ESPY as the Best Outdoor Sportsman, and between 1998 and 2005 he captured five logrolling titles at the Lumberjack World Championships in Hayward, Wis., his hometown.

He married his girlfriend Josie in March of 2006, and was shipped to Iraq the next month. In December, an explosion in Baghdad took his right forearm off.

On one hand, the Salzmans have to be thankful he survived. But on the other hand — well, the other hand is gone. It was obliterated so completely and so violently, doctors later found fragments of Salzman's bones speared into his gunner's leg, as skeletal shrapnel.

After spending eight months at Walter Reed Hospital, Salzman is now back in his hometown in Wisconsin. He is dealing with the effects of Traumatic Brain Injury in addition to the loss of his right arm and some fingers on his left hand. You can follow his continuing story at his blog, Lumberjack in a Desert.